Nearly 400 ocean experts from around the world, led by FERU members including Dr. U. Rashid Sumaila, Dr. Anna Schuhbauer, and Dr. Daniel Skerritt presented a letter to Director-General Ngozi Okonjo-Iweala on 5 November, calling on the world’s governments to agree on new global rules to curb harmful fisheries subsidies at the WTO’s upcoming 12th Ministerial Conference (MC12), which starts at the end of this month. The Director-General has shared the letter with the WTO membership and called it a strong reminder for WTO members to conclude the long-running negotiations and help prevent the depletion of marine fish stocks and biodiversity. 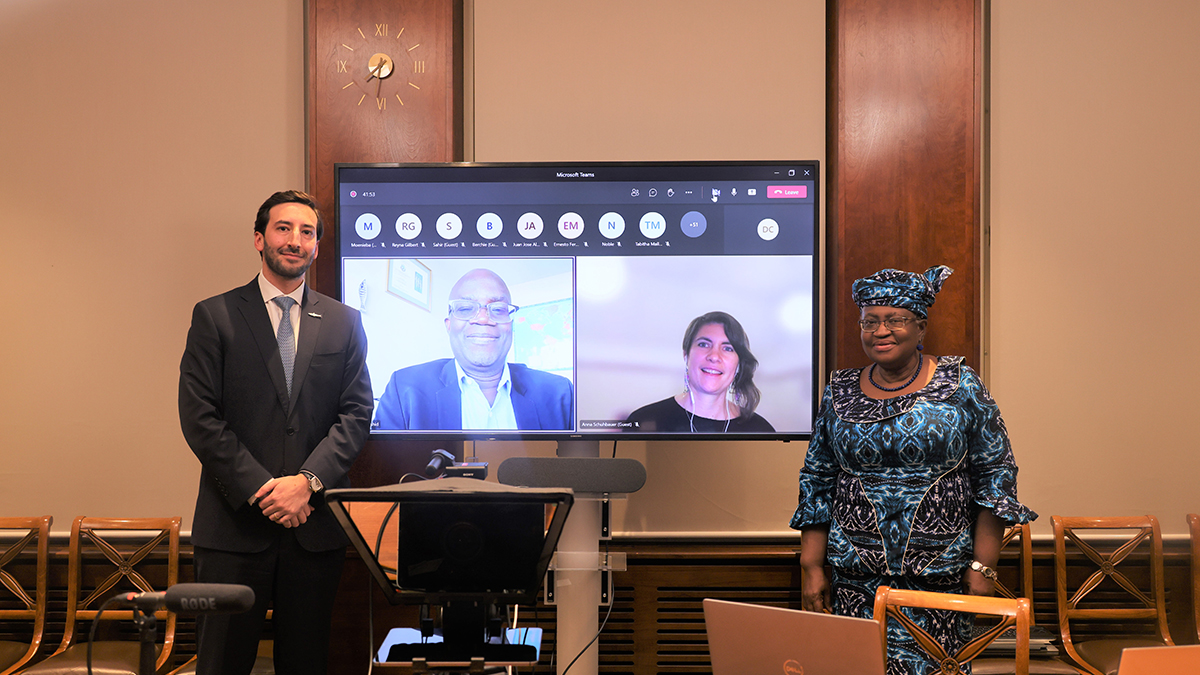 “Science has spoken: reaching an agreement on fisheries subsidies at MC12 would help protect the oceans and, in turn, uphold the long-term food security and livelihoods of millions of people,” DG Okonjo-Iweala said after receiving the letter addressed to the full WTO membership. “This letter is a strong reminder to WTO members of why they are in these negotiations, and what the consequences will be if they do not reach an agreement. The message to our political leaders is clear: they have already committed to concluding these negotiations in Sustainable Development Goal 14.6. They must not delay any further.”

“I welcome the letter and express my appreciation for the important work and input that members of the scientific community have provided in support of the negotiations,” she added.

The letter, which was published in the magazine Science, was presented to the Director-General at a virtual meeting by the lead co-authors, Dr. Rashid Sumaila and Dr. Anna Schuhbauer of  The University of British Columbia’s Fisheries Economics Research Unit, on behalf of the group of scientists from 46 countries spanning six continents. The text of the letter outlines the signatories’ views on what a prospective WTO agreement should accomplish, such as prohibiting support that lowers the cost of fuel and vessel construction and which stimulates distant-water fishing, and decoupling incentives for overfishing from special and differential treatment for small-scale fishers who use low-impact gear or who fish for subsistence. “WTO members must harness their political mandate to protect the health of the ocean and the well-being of society,” the letter concludes.

The chair of the fisheries subsidies negotiations, Ambassador Santiago Wills of Colombia, who also participated in the meeting, said: “We are at a critical juncture and a number of issues remain to be resolved. However, I am encouraged that headway is being made by members in finding bridging solutions among their positions. Solid research from the scientific community has been vital in our exchanges and will keep our momentum going as we head into MC12.”

WTO ministers will convene for MC12 from 30 November to 3 December in Geneva, Switzerland.

Under the mandate from the previous Ministerial Conference and the UN Sustainable Development Goal Target 14.6, negotiators have been given the task of securing agreement on disciplines to eliminate subsidies for illegal, unreported and unregulated fishing and to prohibit certain forms of fisheries subsidies that contribute to overcapacity and overfishing, with special and differential treatment being an integral part of the negotiations.